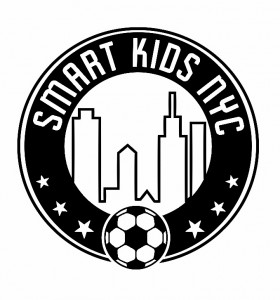 SMART KIDS NYC IS OUR RECREATIONAL SOCCER LEAGUE DESIGNED FOR PLAYERS AGE 7+ USING A FUTSAL APPROACH TO THE GAME.

WHY IS SMART KIDS NYC FOCUSING ON FUTSAL:
One of the beauties of soccer is that the game can be played anywhere the ball can roll, and playing in a variety of conditions helps to develop more well-rounded players. A mix of outdoor and indoor soccer along with some variety in the type of playing surface, size of field and type of ball used will have a positive impact on ball skills and clever play. At times unavailable outdoor spaces or weather conditions dictate that soccer go indoors.
The same basic skills, tactics and knowledge of the game as the 11v11 outdoor game occur indoors. Futsal may offer the best compliment to player development. Young players exposed to playing Futsal show a greater comfort on the ball along with more intelligent movement off-the-ball. The more pleasure they derive from their participation, the more they wish to play and practice on their own. While their instinct to play is natural, their affection and appreciation for soccer must be cultivated in a soccer rich environment.

Futsal is a foundation to such goals because it:
Allows players to frequently touch the one toy on the field, namely, the ball.
In a statistical study comparing Futsal to indoor soccer with walls, players touch the ball 210 percent more often.
Futsal promotes having more quality touches. With Futsal, the emphasis is clearly on control and technique.
With limited space, boundary lines, and constant opponent pressure, the speed of play is greater and improved ball control skills are required.  In Futsal, action is continuous so players are forced to continue play in support of their teammates. In Futsal, players are require to quickly shift from support positions offensively and defensively. Futsal presents many opportunities to score goals. With limited space, an out of bounds and constant opponent pressure, improved ball skills are required. Futsal encourages regaining possession of the ball as a productive, fun and rewarding part of the game (defending). Futsal maximizes active participation and minimizes inactivity and boredom. Action is continuous so players are forced to keep on playing instead of stopping and watching. Futsal provides a well-organized playing environment with improvised fields. Without a wall as a crutch, players must make supporting runs when their teammates have the ball. It reflects the appropriate role of the coach as a facilitator. With all the basic options of the outdoor game in non-stop action mode, players’ understanding of the game is enhanced. Players enjoy the challenge of playing a fast-paced, fun and skill-oriented game that tests their abilities; allowing the game to be the teacher.

SMART KIDS NYC PLAYER DEVELOPMENT MODEL:
SMART KIDS NYC follows the United States Youth Soccer Player Development Model using a player-centered curriculum. Giving the U.S. Soccer Player Development Pyramid, SMART KIDS NYC focuses on zone 1 player development for kids ages U-6 to U-12. Zone 1 has a technical emphasis that is accomplished by focusing on player development versus match outcome. The intent is for coaches, administrators and parents of the players to spotlight the process of playing the game, rather than the score. The measurement of success in Zone 1 is the players’ improvement of ball skills, understanding of the rules of the game, playing fairly and learning general game principles.

SMART KIDS NYC follows U.S. Youth Soccer Recommended Field Dimensions for U6 through U12 age groups. SMART KIDS NYC training sessions replicate the game using age appropriate instruction focusing on Fitness, Psychology, Technique and Tactics. These components of soccer are key to youth player development. Following U.S. Youth Soccer Recommendations, U8 train 1 day per week for 45 minutes which includes 30 minutes of appropriate activities and then a small cited match. U 10 train 2 days per week for 60 minutes, and U12 trains 2 days per week for 75 minutes.

1) Develop the child’s appreciation of the game.
2) Keep winning and losing in proper perspective.
3) Be sensitive to each player’s development needs.
4) Educate the players to the technical, tactical, physical and psychological demands of the game for their level of play.
5) Implement rules and equipment modifications according to the players’ age group.
6) Allow players to experience all positions.
7) Players need to have fun and receive positive feedback.
8) Training should be conducted in the spirit of enjoyment and learning.
9) Provide the appropriate number of training sessions and matches according to the player’s stage of development.
10) Strive to help each player reach their full potential and be prepared to move to the next stage of development.

The development of a soccer player is a long process in which the players progress gradually from a simple to a more complex involvement in the game. This progression requires proper guidance and direction from coaches who are ethical, knowledgeable and licensed. This process cannot be rushed, but players should participate at a level that is both challenging and demanding. There is no guarantee that a player will reach his or her potential, but the opportunity must be provided!

For U8 and U10 player environment, SMART KIDS NYC follows the U.S. Youth Soccer Development recommendations of using a non-results oriented philosophy. This best practice is prefaced with research from sports and child psychologists and pediatricians. They assert that sport should be organized, if it is to be organized at all for children under 10, to allow the children to play because they love to win, not have to win. The goal is to compete to their best rather than compete to be the best (U.S. Youth Soccer Player Development Model, 2012).

SMART KIDS NYC understands that ages 6 through 12 are considered “sampling years” where the coaching approach is centered on the child’s needs instead of performance outcomes. The games play at this age should be small sided games allowing for accelerated skill development and understanding of individual and group tactics while focusing on performance before outcome. The world’s governing body (FIFA) for soccer recognizes the fact that Soccer, as played by FIFA Laws of the Game, is an adult sport, therefore allows for modifications to the Laws of the Game for players under 16 years of age (e.g., size of the field, size, weight and material of the ball, width between goalposts and height of crossbar from the ground, durations of the periods of play, substitutions, etc.).

All ages can play small-sided games, but it has a greater developmental impact on younger soccer players. This has to do with the stages of development that all children go through. As children progress through these stages they mature physically, emotionally and mentally. The reasoning behind small sided games for children is to provide them a stair step approach to learning and playing the adult game of soccer. The small-sided game environment allows them to gradually learn the rules of play, game strategies, tactical concepts, teamwork and fair play as well as quality ball skills through increased time with the ball. American players need to spend more time with the ball. From ages 4 to 14, ball skills must take precedence over the score and the win/loss record. Without ball skills, soccer that is dynamic, intelligent, tactical and exciting will not be possible. Refinement of ability to an expert level takes 10,000 hours of correct repetition according to research supported by the United States Olympic Committee.

SMART KIDS NYC is aligned with the Position Statement of the 55 State Association technical directors on the position of goalkeeper:  “We believe goalkeepers should not be a feature of play at the U-6 and U-8 age groups. All players in these age groups should be allowed to run around the field and chase the toy – the ball. For teams in the U-10 and older age groups, goalkeepers should become a regular feature of play. However, young players in the U-10, U-12 and U-14 age groups should not begin to specialize in any position at this time in their development.”

The analysis of most soccer experts is that small-sided games for young children are most beneficial for learning basic motor skills, basic rules and the fundamental concepts of the game. They also learn how to interact with their peers within a game involving a ball. What is not supported is the use of goalkeepers in this format. Children want to run, kick the ball and score goals. Every child should experience the triumph and success of scoring a goal. They don’t do well when told to stand in one place. If the action is at the other end of the field, a young goalkeeper will find some other activity to hold his or her attention.

Young children have great difficulty visually tracking moving objects, especially if they are in the air. Most children younger than 10 are very reactionary in their movement behavior and will duck or throw hands in front of the face if the ball comes toward the head. Anticipating where the ball might be played is a skill that has not yet developed and that does not really develop until age 9 or 10. Prior to age 9, visual tracking acuity is not fully developed. Players have difficulty accurately tracking long kicks or the ball above the ground. Beginning at approximately age 10, one’s visual tracking acuity achieves an adult pattern.

Striking the ball at a small target accurately is a challenge for all children. Goalkeepers restrict the opportunities to score goals to a select few players. Young children stuck in goal will not develop goalkeeping skills and are more likely to get hit with the ball than actually save it.

It is important to wait until children are better able–physically, mentally and emotionally–to handle the demands of being a goalkeeper. There are no goalkeepers in 4v4 format through age 8. This still allows plenty of time for children to grow up and be the best goalkeepers they can be; most likely keeping them engaged in playing soccer for many years to come. Once players take on the goalkeeper role, they tend to grow in the position through three general stages. Those stages are shot blocker, shot stopper and finally goalkeeper.

SMART KIDS NYC is aligned with US Youth Soccer Approach to “Appropriate Competition” where the goals of youth soccer should be to promote physical activity, fun, life skills (i.e., self-reliance, conflict management and purposeful interaction with others), fair play and good health. Many soccer programs start out like this, but change over time because adults and children misunderstand the difference between competition and cooperation… This is a so-called adult model of competition. Now a child’s readiness for competition must be assessed, accounting for biology, sociology, psychology and physiology. A young player may be physiologically ready for the demands of competition but not psychologically ready. The benefits soccer offers can be lost if results-oriented competition is emphasized too soon. Overt competition involves more ego-oriented goals and tends to promote the attitude that winning is everything. It often discourages children from trying new tasks, but can encourage them to break the rules in order to win. Cooperation in soccer is the willingness to work together to achieve a common purpose, which empowers players with creative problem solving skills, better communication skills, more sharing of emotions and a better sense of team. Parents, administrators and coaches have a large influence on the process of balancing cooperation and competition. The needs and goals of the players must be considered in order to build a successful youth soccer program.